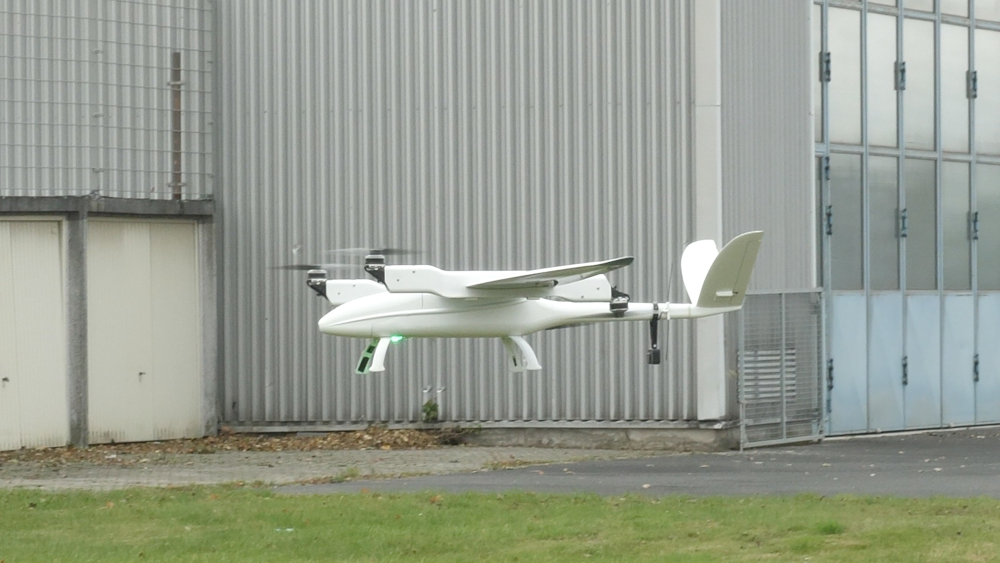 PROCEDURE FOR THE INTEGRATION OF AIR TAXIS INTO THE AIRSPACE

For passenger transport by air taxis to become a reality, procedures are needed to integrate them safely into the airspace. As part of the SkyCab II research project, Droniq GmbH and DFS Aviation Services (DAS) have developed a corresponding procedure together with the SkyCab partner Mönchengladbach Airport (MGL) and Germandrones. The aim is to create the basis for simultaneous flight operations of manned and unmanned air traffic at an airport controlled by DAS with a control zone.

The cooperation of the two subsidiaries of DFS Deutsche Flugsicherung GmbH with Mönchengladbach Airport and Germandrones, which operates the drone for the SkyCab project, made the success of the test flight possible.

“With this project, we are laying the first foundations for integrating flight taxis efficiently and, above all, safely into air traffic,” explains Droniq CEO Jan-Eric Putze. “With this, we are taking another important step to further advance Germany as a lead market for unmanned air traffic,” adds Putze.

Droniq obtained permission from the responsible state aviation authority for test flights with drones in controlled airspace beyond the visual range of the drone pilot (BVLOS). An essential component was the creation of an operational concept and a risk assessment. The basis for this was the drone traffic management system developed by DFS and marketed by Droniq. Traffic Management System for Drones (UTM), which was developed by DFS and distributed by Droniq. UTM makes the air traffic (manned and unmanned) at and around Mönchengladbach Airport visible to the drone pilot.

This enhancement to the drone workstation enables the drone pilot to follow the visual flight rules that apply in controlled airspace, such as avoidance rules, and to safely follow air traffic control instructions.

As part of their traffic control duties, the air traffic controllers of DAS integrate the Skycab test flights into ongoing aerodrome operations by means of coordinated flight corridors. In addition, DAS, as the responsible air navigation service provider, has provided the required proof of safety to the Federal Supervisory Office for Air Navigation Services (BAF) for the adapted air navigation procedures.

The aim of the two DFS subsidiaries is to standardise procedures for the operation of unmanned aerial vehicles by testing further test flights, thus enabling their use in control areas under the responsibility of DAS.

The aim of the SkyCab research project, funded by the Federal Ministry of Transport and Digital Infrastructure (BMVI) and led by Aachen University of Applied Sciences, is to develop a system for flying taxis with an associated mobility concept for the model region between the Meuse, Rhine and Ruhr rivers. At Mönchengladbach Airport, research is being conducted specifically on the integration of the new flying objects into active airspace. The project successfully completed its practical test here on Monday.

DFS Aviation Services GmbH (DAS) is a subsidiary of DFS Deutsche Flugsicherung GmbH and employs more than 400 people around the world. As a certified ATM provider, DAS controls air traffic at German small and medium-sized airports and sells products and services related to Air Traffic Control around the world. Its customers include ATM organisations, airports, airlines and aviation authorities all over the world. Through its subsidiary, Air Navigation Solutions Ltd. (ANSL), DAS is also responsible for air traffic at Edinburgh and London-Gatwick. The subsidiary DFS Aviation Services Bahrain Co WLL provides support in the Middle East in the areas of air traffic control and air traffic control technology. In Asia, DFS Aviation Services has a representative office in Beijing and a branch office in Singapore. Through its joint venture with Frequentis AG of Vienna, Frequentis DFS Aerosense GmbH, DAS also sells Remote Tower solutions worldwide.

Droniq GmbH , based in Frankfurt am Main, is a joint venture company of DFS Deutsche Flugsicherung and Deutsche Telekom AG. Its business objective is to provide, market and sell services for drones and other aircraft in Europe. DFS holds 51 per cent of the shares in the company through its subsidiary DFS IBS GmbH, while Deutsche Telekom holds 49 per cent through its company Telekom Innovation Pool GmbH. www.droniq.de