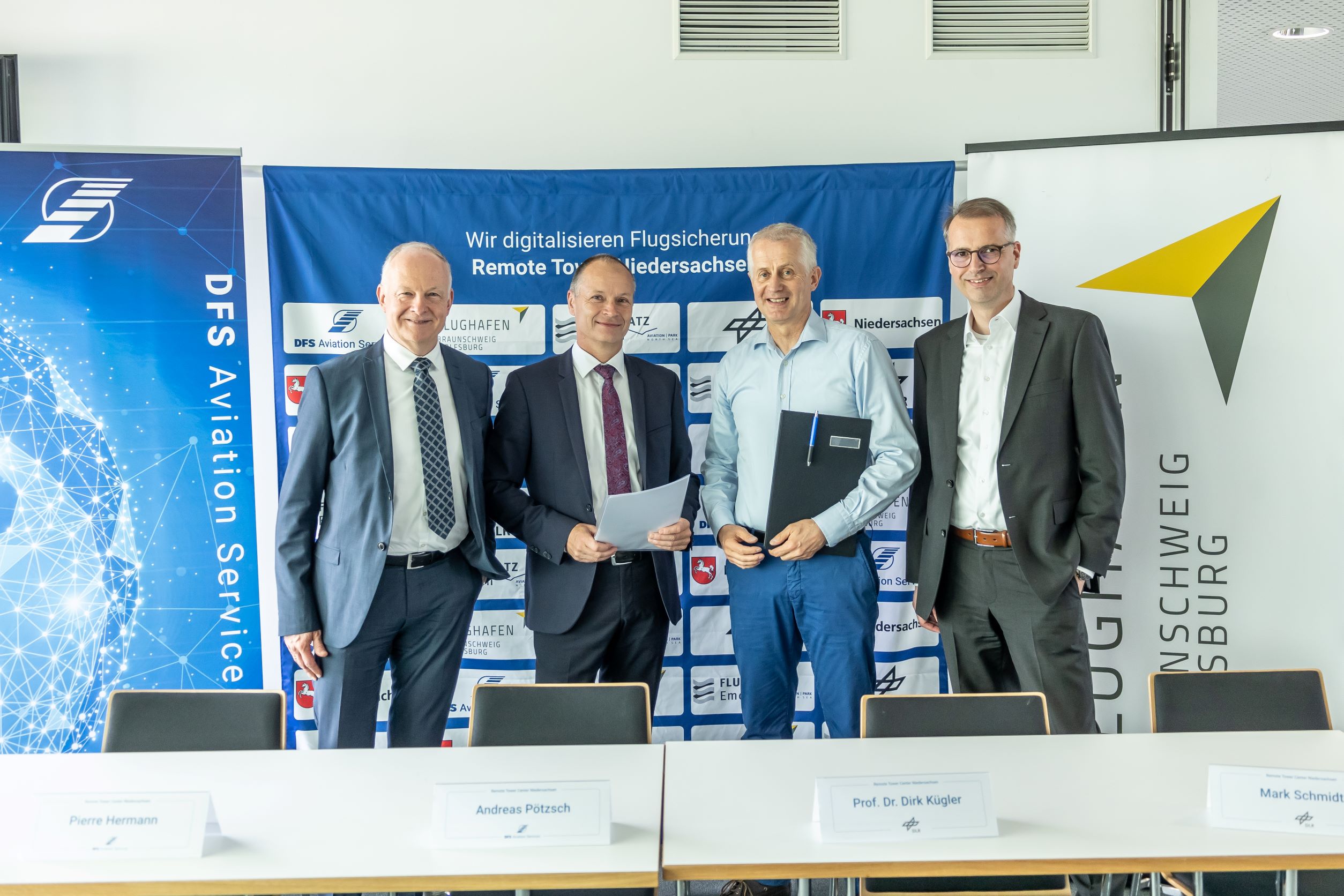 The “Remote Tower” concept consists of the location-independent provision of air navigation services for several airports from one control centre. This concept is now becoming a reality in Braunschweig: From mid-2024, DFS Aviation Services GmbH (DAS) will be running air navigation services at the Braunschweig-Wolfsburg and Emden airports centrally from Braunschweig. In order to further improve and expand this promising technology, the German Aerospace Center (DLR) and DAS have agreed to set up a joint “Research and Development Cluster” in Braunschweig. The relevant contract was signed on 19 May 2022. The Remote Tower concept was developed 20 years ago at DLR in Braunschweig.

“In the new research cluster, we’re combining the DAS operational remote tower system now being established at Braunschweig-Wolfsburg Airport with the large-scale research facilities for remote monitoring of airports that we have here at DLR,” explains Prof Dirk Kügler, Head of the DLR Institute of Flight Guidance. The goal of the cooperation is to create an optimised link between daily air traffic control operations from an RTC centre with the research activities of the DLR.

For this purpose, the cooperation partners are setting up a mirrored Remote Tower air traffic controller workstation in the research laboratories of the DLR Institute of Flight Guidance. This “twin” replicates the operational working positions in the real RTC Niedersachsen, and is fed all the important air traffic control data. The joint research platform enables the researchers, together with the air traffic controllers, to resolve research and development questions based on actual live data from the airport, thereby allowing even more airports to be integrated into the RTC Niedersachsen in the future. New sensor systems, training plans and workplace designs will also be developed and tested here.

Andreas Pötzsch, Managing Director of DAS, is confident: “The collaboration with DLR will advance the further development of the DAS RTC project with regard to multiple remote applications.” This means that, in the future, several airports can be monitored by one controller. This technology will enable air traffic control to be carried out even more efficiently in the future.”

The concept of remote monitoring began more than 20 years ago with research work by DLR. It has since become a reality at various airports around the world. In 2015, the first airport was monitored remotely in Sweden. DFS Deutsche Flugsicherung followed suit in 2018 with the commissioning of the DFS Remote Tower Centre at the international commercial airport in Leipzig, from which Saarbrücken, Erfurt-Weimar and soon Dresden airport will be served. The monitoring of Emden airport from Braunschweig-Wolfsburg airport as of 2024 represents a further milestone.

The DLR Institute of Flight Guidance in Braunschweig is regarded as the inventor of the remote tower concept. It has been researching this technology since 2002, and in 2005 tested the general feasibility of remote monitoring of airports for the first time with a prototype at Braunschweig Research Airport. Since then, the institute has developed comprehensive real-time simulators and the necessary know-how in the field, enabling it for example to test innovative workplace concepts and support functions together with airport controllers.

“Remote Tower’s coming home, you could say,” says Prof Kügler happily. “We’re happy to be working together with DAS on the next development steps in remote monitoring here in Braunschweig.

DFS Aviation Services GmbH (DAS) is a subsidiary of DFS Deutsche Flugsicherung GmbH and employs more than 400 people around the world. As a certified ATM provider, DAS controls air traffic at German small and medium-sized airports and sells products and services related to Air Traffic Control around the world. Its customers include ATM organisations, airports, airlines and aviation authorities all over the world. Through its subsidiary, Air Navigation Solutions Ltd. (ANSL), DAS is also responsible for air traffic at Edinburgh and London-Gatwick. The subsidiary DFS Aviation Services Bahrain Co WLL provides support in the Middle East in the areas of air traffic control and air traffic control technology. In Asia, DFS Aviation Services has a representative office in Beijing and a branch office in Singapore. Through its joint venture with Frequentis AG of Vienna, Frequentis DFS Aerosense GmbH, DAS also sells Remote Tower solutions worldwide. 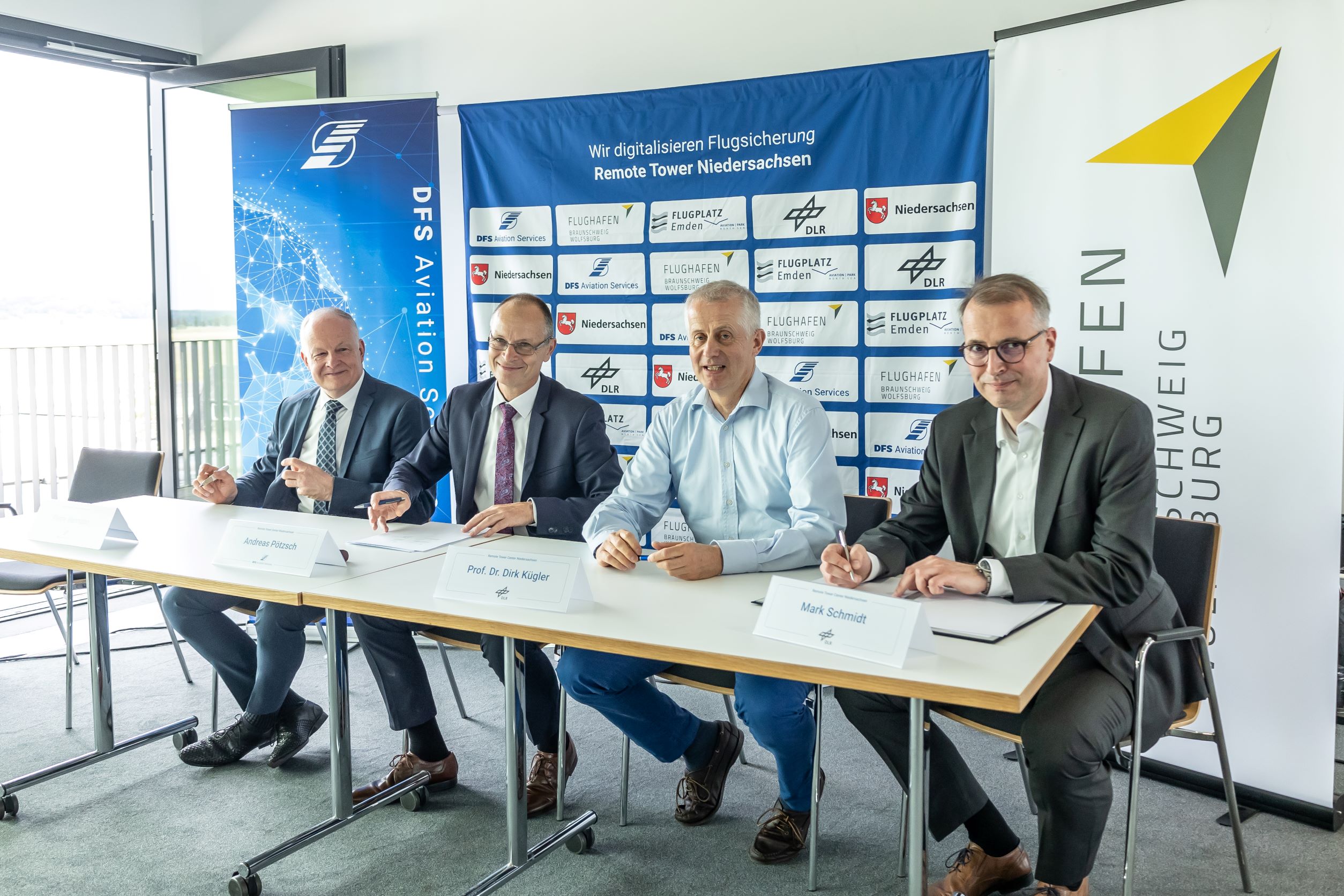